BL21 cells are a strain of E. coli that is widely used in research laboratories, biotechnology and industrial production due to their capability to express proteins highly efficient. Ultrasonic cell disruption, lysis and protein extraction is the common method to isolate and collect the targeted proteins from the cellular interior of BL21 cells. Ultrasonication disrupts the cell completely and releases all entrapped proteins, making 100% of the protein available.

BL21 cell is a chemically competent E. coli bacterial strain suitable for transformation and high level protein expression using a T7 RNA polymerase-IPTG induction system. BL21 cells allow high-efficiency protein expression of any gene that is under the control of a T7 promoter. The E. coli strain BL21(DE3) is a T7 RNA polymerase-based protein production strain combined with T7 promoter-based expression vectors and is widely applied in laboratories and industry to produce recombinant proteins. In BL21(DE3), expression of the gene encoding the recombinant protein is transcribed by the chromosomally encoded T7 RNA polymerase (T7 RNAP), which transcribes eight times faster than conventional E. coli RNAP. This makes the strain BL21(DE3) highly efficient and turns its into one of the most preferred protein expression cell systems.

Protocol for Ultrasonic Lysis and Protein Extraction from BL21 Cells

Cell lysis of BL21 cells is mostly performed using ultrasonication in combination with sodium lauroyl sarcosinate (also known as sarkosyl) as lysis buffer. The advantages of ultrasonic cell disruption and protein extraction lie in the reliability, reproducibility as well as simple, safe and rapid operation of ultrasonicators. The protocol below gives a step-by-step direction for ultrasonic BL21 cell lysis: 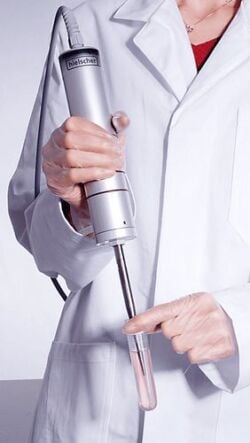 Customers worldwide use the VialTweeter and VialPress for their daily sample preparation work in biological, biochemical, medical and clinical laboratories. The intelligent software and temperature control of the UP200St processor, temperature is reliably controlled and heat-induced sample degradation avoided. Ultrasonic sample preparation with the VialTweeter and VialPress delivers highly reliable and reproducible results!

Find the Optimal Ultrasonic Disruptor for your Lysis Application

Hielscher Ultrasonics is long-time experienced manufacturer of high-performance ultrasonic cell disrupters and homogenizers for laboratories, bench-top and industrial scale systems. Your bacterial cell culture size, your research or production goal and the volume of cell to process per hour or day are essential factors to find the right ultrasonic cell disruptor for your application.
Hielscher Ultrasonics offers various solutions for the simultaneous sonication of multi-samples (up to 10 vials with the VialTweeter) and mass samples (i.e., microtiter plates / ELISA plates with the UIP400MTP), as well as the classic probe-type lab ultrasonicator with different power levels from 50 to 400 watts to fully industrial ultrasonic processors with up to 16,000watts per unit for commercial cell disruption and protein extraction in large production. All Hielscher ultrasonicators are built for the 24/7/365 operation under full load. Robustness and reliability are core features of our ultrasonic devices.
All digital ultrasonic homogenizers are equipped with smart software, coloured touch display and automatic data protocolling, which make the ultrasonic device into a convenient work tool in lab and production facilities.
Let us know, what kind of cells, what volume, with what frequency and with what target you have to process your biological samples. We will recommend you the most suitable ultrasonic cell disruptor for your process requirements.

The table below gives you an indication of the approximate processing capacity of our ultrasonic systems from compact hand-held homogenizers and MultiSample Ultrasonicators to industrial ultrasonic processors for commercial applications: 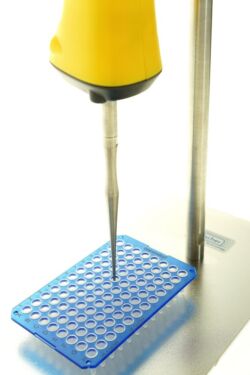 Escherichia coli is a bacteria type, that is non-spore-forming, Gram-negative and is characterized by its form of a straight rod. E.coli bacteria are present in the environment, foods, and intestines of humans and animals. E. coli is usually motile by using peritrichous flagella, but there are nonmotile types, too. E.coli are so-called facultatively anaerobic chemoorganotroph organisms, which means they are capable of both respiratory and fermentative metabolism. Most E.coli types are benign and fulfil useful functions in the body, e.g. suppressing the growth of harmful bacterial species, synthesising vitamins etc..
Escherichia coli bacteria cell of the so-called B type are a special category of E.coli strains, which are widely used in research to investigate mechanisms such as bacteriophage sensitivity or restriction-modification systems. Furthermore, E.coli bacteria are valued as reliable workhorse for protein expression in biotechnology and life science laboratories. For instance, E.coli are used to synthesize compounds such as proteins and oligosaccharides on industrial scale. Due to specific features such as protease deficiency, low acetate production at a high level of glucose, and enhanced permeability, E. coli B cells are he most frequently used host cells for the production of genetically engineered proteins.

Recombinant proteins (rProt) are are gaining significant importance in manifold branches, including in the chemical production, pharmaceutical, cosmetic, human and animal medicine, agriculture, food as well as waste treatment industries.
The production of recombinant protein requires the use of an expression system. As expressing cell systems for the production of recombinant DNA, both prokaryotic and eukaryotic cells can be used. Whilst bacterial cell are most widely used for protein expression due to factors such as low cost, easy scalability and simple media conditions, mammalian, yeast, algae, insect and cell-free systems are established alternatives. The protein type, functional activity, as well as the required yield of expressed protein influence the selection of the cell system used for protein expression.
In order to express recombinant protein, a particular cell must be transfected with a DNA vector containing the template of recombinant DNA. The cells transfected with the template are then cultured. As consequence of the cellular mechanism, the cells transcribe and translate the protein of interest, thereby producing the targeted protein.
As the expressed proteins are entrapped in the cellular matrix, the cell must be lysed (disrupted and broken) to release the proteins. In a subsequent purification step, the protein is separated and purified.
The first recombinant protein used in treatment was recombinant human insulin in 1982. Today, more than 170 types of recombinant protein are produced worldwide for medical treatments. Commonly used recombinant proteins used in medicine are for instance recombinant hormones, interferons, interleukins, growth factors, tumor necrosis factors, blood clotting factors, thrombolytic drugs, and enzymes for treating major diseases such as diabetes, dwarfism, myocardial infarction, congestive heart failure, cerebral apoplexy, multiple sclerosis, neutropenia, thrombocytopenia, anemia, hepatitis, rheumatoid arthritis, asthma, Crohn’s disease, and cancers therapies. (cf. Phuc V. Pham, in Omics Technologies and Bio-Engineering, 2018)