Sonication is a highly efficacious, reliable and simple technique for the preparation of high-performance hydrogels. These hydrogels offer excellent material properties such as absorption capacities, viscoelasticity, mechanical strength, compression modulus, and self-healing functionalities. 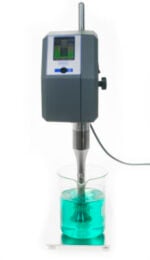 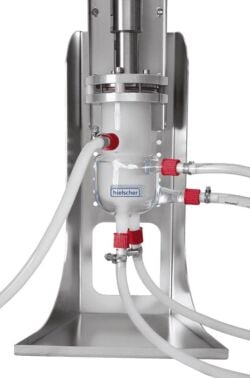 First, ultrasonication promotes polymerization and cross-linking reactions during hydrogel formation.
Secondly, ultrasonication has been proven as reliable and effective dispersion technique for the production of hydrogels and nanocomposite hydrogels.

Ultrasonic Cross-Linking and Polymerization of Hydrogels

Cass et al. (2010) prepared several “acrylic hydrogels were prepared via ultrasonic polymerization of water soluble monomers and macromonomers. Ultrasound was used to create initiating radicals in viscous aqueous monomer soluions using the additives glycerol, sorbitol or glucose in an open system at 37°C. The water soluble additives were essential for the hydrogel production, glycerol being the most effective. Hydrogels were prepared from the monomers 2-hydroxyethyl methacrylate, poly(ethylene glycol) dimethacrylate, dextran methacrylate, acrylic acid/ethylene glycol dimethacrylate and acrylamide/bis-acrylamide.” [Cass et al. 2010] Ultrasound application using a probe ultrasonicator was found to be an effective method for the polymerization of water soluble vinyl monomers and the subsequent preparation of hydrogels. The ultrasonically initiated polymerization occurs rapidly in the absence of a chemical initiator. 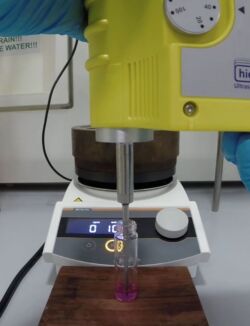 Ultrasonication is compatible with all kinds of polymers and biopolymers and allows to reinforce hybrid hydrogels with nano-structured materials such as nanoparticles, nanocrystals or nanofibres. Reinforcing hydrogels with various nanomaterials allows to modify and control physicochemical and rheo-mechanical properties of nanocomposite hydrogels, since the microstructures are the key factor for the obtained material properties.

Mohammadinezhada et al. (2018) successfully produced a superabsorbent hydrogel composite containing poly(acrylamide-co-itaconic acid) and multi-walled carbon nanotubes (MWCNTs). Ultrasonication was performed with the Hielscher ultrasonic device UP200S.The stability of the hydrogel increased with increasing MWCNTs ratios, which might be attributed to the hydrophobic nature of the MWCNTs as well as the increase of the crosslinker density. The water retention capacity (WRC) of the P(AAm-co-IA) hydrogel was also increased in the presence of the MWCNT (10 wt%). In this study, the effects of ultrasonication were rated superior in regards to the uniform distribution of the carbon nanotubes on the polymer surface. The MWCNTs were intact without any interruption in the polymeric structure. Additionally, the strength of the obtained nanocomposite and its water retention capacity and the absorption of other soluble materials like Pb (II) were increased. Sonication broke the initiator and dispersed the MWCNTs as an excellent filler in the polymer chains under increasing temperature.
The researchers conclude that these “reaction conditions cannot be achieved through conventional methods, and the homogeneity and good-dispersion of particles into the host cannot be achieved. In addition, sonication process separate nanoparticles into single particle, while stirring cannot do this. Another mechanism for the size reduction is the effect of powerful acoustic waves on the secondary bonds like hydrogen bonding which this irradiation breaks the H-bonding of particles, and subsequently, dissociates the aggregated particles and increase the number of free adsorptive groups like -OH and accessibility. Thus, this important happening makes sonication process as a superior method over the others like magnetic stirring applied in the literatures.” [Mohammadinezhada et al., 2018]

Hielscher Ultrasonics manufactures high-performance ultrasonic equipment for the synthesis of hydrogels. From small and mid-size R&D and pilot ultrasonicators to industrial systems for commercial hydrogel manufacturing in continuous mode, Hielscher Ultrasonics has your process requirements covered.
Industrial-grade ultrasonicators can deliver very high amplitudes, which allow for reliable cross-linking and polymerization reactions and the uniform dispersion of nano particles. Amplitudes of up to 200µm can be easily continuously run in 24/7/365 operation. For even higher amplitudes, customized ultrasonic sonotrodes are available.

Ask us today for additional technical information, pricing and a noncommittal quotation. Our long-time experienced staff is glad to consult you!
The table below gives you an indication of the approximate processing capacity of our ultrasonicators:

The Hielscher SonoStation makes the sonication of mid-size batches using a flow cell reactor easy.
The compact SonoStation combines a 38 liter agitated tank with an adjustable progressive cavity pump that can feed up 3 liters per minute into one or two ultrasonic flow cell reactors.
Ultrasonic Mixing Station - SonoStation with 2 x 2000 Watts Homogenizers

What are Hydrogels used for?

When the classification of hydrogels is made depending on their physical structure can be classified as follows:

When focused on polymeric composition, hydrogels can be also classified into the following three categories:

Based on type of crosslinking, hydrogels are classified into:

Physical appearance leads to classification into:

Classification based on network electrical charge: