Ultrasonic extraction has been proven to be highly efficient for the isolation of superior quality extracts of microalgae. Spirulina pigments such as phycocyanin are known as superfood, which contribute to health benefits due to their high content of antioxidants, vitamins and proteins. In order to produce highly concentrated supplements such as powders and tablets, the blue pigments must be extracted from the spirulina algae.

Arthrospira platensis (A. platensis) and Arthrospira maxima (A. maxima) are known under the term spirulina. Spirulina are blue-green algae, which are rich in amino acids and antioxidants. With a high load of nutrients such as proteins, enzymes, minerals, and vitamins A, K, B12, iron and manganese, they are categorized as a superfood. The algae genus Arthrospira has an especially high content of proteins. Its protein content ranges from 53 to 68% by dry weight and offers the full spectrum of all essential amino acids. Furthermore, Arthrospira has high amounts of polyunsaturated fatty acids (PUFAs), which is approx. 1.5 to 2% of the total lipid content of 5 to 6%. These PUFAs contain the γ-Linolenic acid (GLA), an essential Omega-6 Fatty acid. Further bioactive compounds of Arthrospira include vitamins, minerals as well as photosynthetic pigments.
Note: Scientifically, Spirulina platensis (S. platensis) and Spirulina maxima (S. maxima) are correctly termed as Arthrospira platensis (A. platensis) and Arthrospira maxima (A. maxima). Both species were once classified in the genus Spirulina and are until today colloquially known under the spirulina name. Although the introduction of two separate genera of Arthrospira and Spirulina is now generally accepted, the term spirulina is often used as umbrella term. 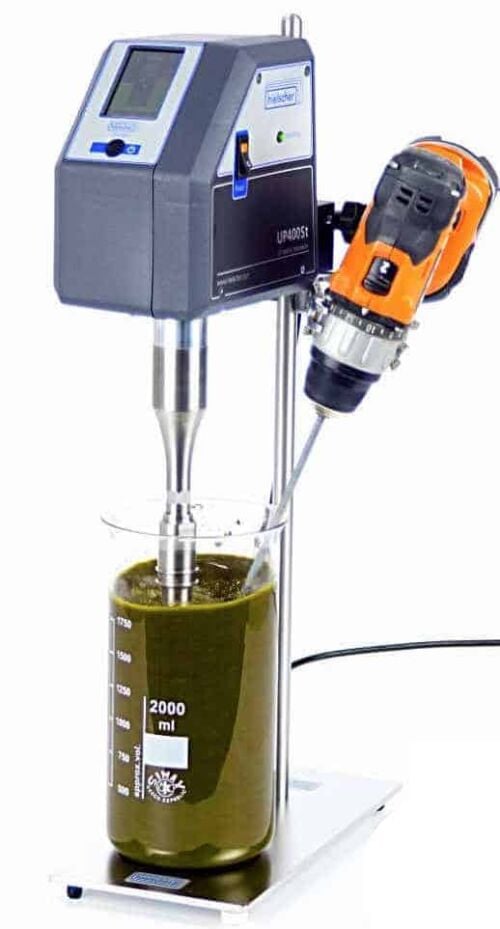 Ultrasonic cell disruptors (also termed as ultrasonic extractors) are well known for their capability to open cells in order to release intracellular material. When intense ultrasound waves are coupled into fluids, the phenomenon of acoustic cavitation occurs. The cavitational forces disrupt cell walls and enhances mass transfer so that the bioactive target compounds are transported from the cell into the liquid. 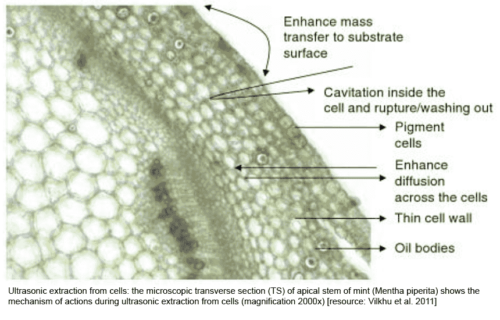 Prabuthas et al. (2011) have developed the following extraction protocol in order to obtain a high quality phycocyanin extract: Phycocyanin extraction was evaluated in terms of phycocyanin concentration using distilled water and 1% CaCl2 solution. The sea algae spirulina is used in dried form since the wet biomass is immediately utilized by bacteria and starts degradation because of its nutritional composition. Hence to avoid these problems, the use of dried algae biomass is recommended. The extraction was carried out by mixing 0.1g of dried biomass with amount of the solvent, sonication was performed time and amplitude according to the experimental design. The sample suspensions were sonicated using a Hielscher’s UP50H ultrasonic cell disruptor, followed by centrifugation for 15 min at 13500rpm using refrigerated centrifuge. The phycocyanin and protein content during the extraction with different solvents were calcium chloride and distilled water investigated.
The maximum amount of phycocyanin, 0.3116mg/ml was obtained in calcium chloride solution followed by 0.299mg/ml in distilled water. The maximum amount of protein, 63.63% was obtained in distilled water solvent and 54.69% in calcium chloride solution. So CaCl2 solution was found to the best solvent for extraction of phycocyanin with ultrasound assistance.

Hielscher is your long-term experienced partner when is comes to powerful, reliable ultrasonic extraction of bioactives from plant and phyto biomass. All ultrasonic extractors can be operated 24/7 and are suitable for the commercial production of dietary extracts. Our product range covers the full spectrum from smaller hand-held biodisruptors to pilot ultrasonicators and industrial ultrasonic systems. Various accessories such as different sonotrodes and flow cell reactors allow for the optimal adaption to your process requirements. All Hielscher ultrasonic processors are robust, easy to operate and designed for user-friendliness. Our digital controlled ultrasonicators come with a built-in SD card for automatic protocolling of sonication data.
The table below gives you an indication of the approximate processing capacity of our ultrasonicators:

Our well-trained staff ensures high customer service and professional consultancy.
Contact us today! We are glad to recommend you the most suitable ultrasonic extractor for your application.

Spirulina is a kind of cyanobacteria (also known as cyanophyta) which are a phylum of bacteria that obtain their energy through photosynthesis. They are the only photosynthetic prokaryotes able to produce oxygen. The name cyanobacteria comes from the color of the bacteria (Greek: κυανός, translit. kyanós, lit. blue). Due to their colour they are also called blue-green algae, though the term algae in modern usage is restricted to eukaryotes. Spirulina platensis (S. platensis) is a multifilamentous prokaryotic cyanobacterium which can be easily grown as a monoculture in open ponds or closed bioreactors. C-phycocyanin (C-PC) is the major phycobiliprotein in spirulina.

Spirulina is a popular dietary supplement derived from biomass of marine cyanobacteria (blue-green algae). The two spirulina species used for the preparation of vegan protein and pigment supplements are Arthrospira platensis and Arthrospira maxima. The extract released from these microalgaes is rich in antioxidants, amino acids and vitamins. Therefore, the blue extract powder is added to juices, smoothies, shakes and drinks and gives them a beautiful intense blue colour. Alternatively, the spirulina extract can be consumed in tablet form.
Phycocyanin allophycocyanin and phycoerythrin are a pigment-protein complexes from the light-harvesting phycobiliprotein family, which are known for their intense light blue color. Phycocyanin is an accessory pigment to chlorophyll. Since all phycobiliproteins are water-soluble, they are not present within the membrane, instead phycobiliproteins are bound as aggregates (so-called phycobilisomes) to the cell membrane.

Ultrasound-Assisted Extraction (UAE) is used to release and isolate bioactive compounds from phyto material as well as tissue.
For ultrasonic extraction processes, intense ultrasound waves are coupled into a medium where the waves genrate alternating compression and expansion. During the compression / expansion cycles, vacuum bubbles are created which grow over several cycles until they cannot absorb more energy so that they implode violently. The bubble implosion produces a highly energetic state with locally occurring temperatures of up to 5000K, pressure differentials of 1000atm, heating and and cooling rates above 1010 K/s as well as liquid jets with velocities of 280m/s. This phenomenon is known as acoustic cavitation. 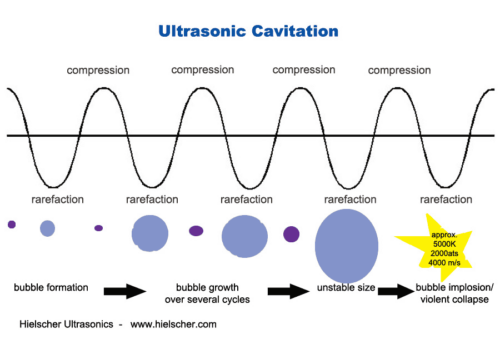