Diacylglycerol (DAG) rich oils are used for food, pharma and cosmetic applications. They have got a lot of interest due to their high nutritional value since they are digested and metabolized in a way, which significantly reduces body weight.
By an ultrasonically assisted bio-catalyzed hydrolysis, standard vegetable oils can be turned into DAG-rich edible oils. The ultrasonic-enzymatic hydrolysis results in a high yield of a diacylglycerol-rich oil in a short reaction times and under mild conditions.
A combination of ultrasound and enzymatic catalysis can be used to upgrade common oils, e.g. palm oil, to oil with a high diacylglycerol content. A high diacylglycerol content gives the oil a high nutritional value.

The benefits of ultrasound: 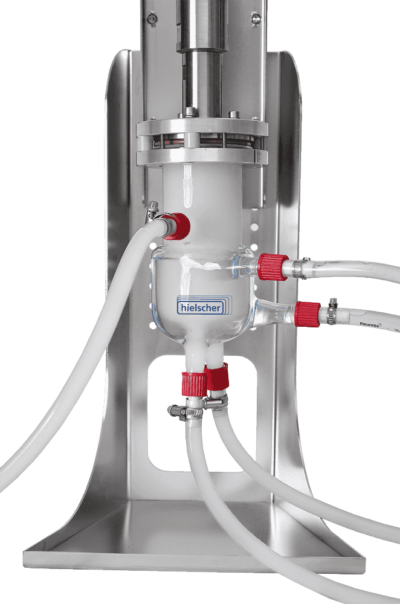 Awadallak et al. (2013) have investigated the ultrasonically assisted hydrolysis of palm oil using Lipozyme RM IM as biocatalyst. In the two-step reaction, ultrasound is used to promote the emulsification of oil and water. In the second step, the enzymes are added for the catalytic conversion.
The picture on the right shows the ultrasonic setup as used in the research of Awadallak: the ultrasonic probe device UP200S (200W, 24kHz) with glass flow cell for a continuous sonication under controlled conditions.

The research group found that following two-step process results in the best results: The reaction was carried out in a ultrasonic glass flow cell with 60ml volume (see picture on the right) at 55°C for 24 h. Palm oil (15 g) and water (1.5 g) were added to the reactor. The ultrasound probe of the ultrasonicator UP200S was inserted to a depth of about 10mm into the water/oil system, the power was adjusted to 80W and turned on for 3 min to emulsify the system before being removed, and then the enzyme (1.36 wt.% water + oil mass) was added while the solution was mixed by magnetic stirring (300 rpm).
Thus ultrasonically assisted bio-catalysis yielded DAG oil with 34.17 wt.% concentration after 12h reaction time. The sonication step itself was very short with a duration of just 1.2 min.

In the presented trials, DAG oil with 34.17 wt.% concentration was obtained after 12 h of reaction. The sonication step took just 1.2 min.
The ultrasonic-enzymatic catalysis convinces by its great advantages for large-scale production, as its energy costs are very low and its short emulsification time allows the use of reduced continuous ultrasonic equipment to feed large hydrolysis reactors. [Awadallak et al. 2013] 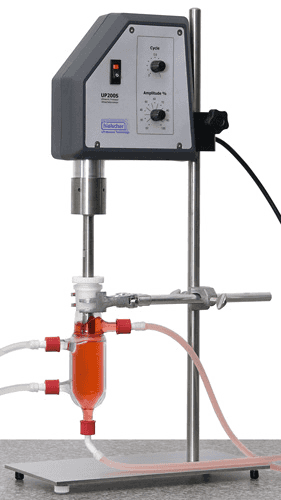 About Diacylglycerols
Diacylglycerols (DAG) are commonly used in different degrees of purity as additives for enhancing the plasticity of fats or as bases for the food, medicine and cosmetic industries. DAG are also used as estranger oils to separate materials from moulds and as an adjuster of fat crystals, precursors for organic synthesis of products such as phospholipids, glycolipids, lipoproteins, pro-drugs such as DAG-conjugated chlorambucil for treatment of lymphoma, (S)-(3,4-dihydroxyphenyl)alanine (LDOPA) for treatment of Parkinson’s disease and many others. More recently, DAG-rich oil has been used as a functional cooking oil, with a content of least 80% of 1,3-DAG. [Nagao et al., 2000]
Diacylglycerol (DAGs) can be produced by partial hydrolysis, esterification or glycerolysis through chemical or enzymatic catalysis. The enzymatic catalysis is the preferred method since it can be carried out under the mildest conditions (lowest temperature and pressure).