Mustard condiment is produced from mustard flour and water or vinegar. Ultrasonic processing of mustard is a rapid and efficient method to release the full flavour spectrum from the ground mustard seeds. In a non-thermal, mild shear process, ultrasonic cavitation provides a homogeneous mixing and increases the mass transfer. Thereby, flavour ingredients and bioactive compounds are released and a tasteful, spicy mustard condiment is obtained.

Mustard is a popular and healthy condiment made from the seeds of a mustard plant (white/yellow mustard, Sinapis alba; brown/Indian mustard, Brassica juncea; black mustard, Brassica nigra). The whole, ground, cracked or perforated mustard seeds are mixed with water, vinegar, lemon juice, white wine, or other liquids. Salt and optionally other spices such as turmeric, and/or honey are added to create a paste or sauce ranging in color from bright yellow to dark brown. The taste of mustard has a wide range and covers innumerable facets from sweet to spicy. The typical mustard flavour ia achieved by mixing ground mustard seeds with water causes a chemical reaction between two compounds in the seed: the enzyme myrosinase and various glucosinolates such as sinigrin, myrosin, and sinalbin. The myrosinase enzyme turns the glucosinolates into various isothiocyanate compounds known generally as mustard oil. The concentrations of different glucosinolates in mustard plant varieties, and the different isothiocyanates that are produced, make different flavors and intensities.

Ultrasonic Mustard Processing: Ultrasonication is a form of mechanical treatment, which creates shear forces and thorough mixing. Although sonication gives a intense mixing, it is a non-thermal processing method. This means, the temperature can be precisely controlled and the thermal degradation of heat-sensitive compounds is prevented. The ultrasonic cavitation promotes the release of soluble compounds from plant cells, since during the ultrasonic extraction the cell walls are broken down. The micro-mixing of ultrasound improves mass transfer and the solvent access into the interior of the cell. Thereby, a complete extraction of bioactive compounds, e.g. flavours and nutritional valuable substances, is achieved. 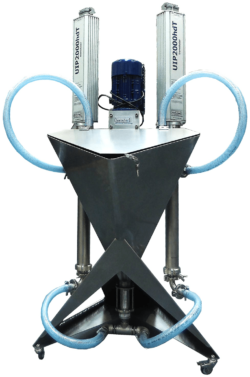 Hielscher Ultrasonics supplies bench-top and full-industrial ultrasonic processors for the processing of food and beverages. As a mechanical, non-thermal treatment, ultrasonic processing is a mild mixing technique, which provides a rapid and complete mixing of solids in liquids. Acoustic cavitation – generated by intense ultrasound waves – perforates and breaks the cell walls of mustard seeds so that the flavour compounds are released and thereby available to the consumer’s taste buds. Ultrasonic processing allows for the precise control over all important processing parameters such as amplitude, temperature and pressure. The mild process conditions preserve the nutritional compounds and prevent thermal degradation of valuable bioactive ingredients.
Hielscher’s ultrasonic equipment is very robust and reliable, which allows for 24/7 operation at heavy duty and in demanding environments.
The table below gives you an indication of the approximate processing capacity of our ultrasonicators:

The mustard family Cruciferae branches into various varieties of mustard types such as white / yellow mustard, (Sinapis alba), brown / Indian mustard (Brassica juncea) and black mustard (Brassica nigra). The mustard plant itself has a sharp, hot, pungent flavor, which makes the crop so valuable as raw material for the condiment production.

After harevsting and cleaning, the mustard seeds are dried and stored until processing. When mustard condiment is produced, the seeds can be optionally soaked as a pre-treatment. The soaking in water or vinegar softens the seeds and facilitates the subsequent removal of the hulls. Milling the seed using a stone mill or a three-roll mill is a major process step in the production of mustard. After milling the mustard seeds into mustard flour, the milled mustard powder is sifted to separate the hulls and bran. The pure mustard powder is then mixed with water, vinegar, white wine and/or other liquids and blended into a fine, homogeneous paste. In a subsequent step, spices, flavours and/or honey are added to create a specific mustard flavour profile. Before bottling or packaging the mustard, the condiment is heated to a specific temperature, where it simmers for a specific time period, which both are determined by the mustard recipe. Some mustard preparations require an additional ageing step, where the condiment ages in large storage vessels in order to develop its flavour profile.

Mustard is rich in bioactive compounds, which are known for their properties.
Allyl isothiocyanate and 4-hydroxybenzyl isothiocyanate are organosulfur compounds, which give mustard its sharp, hot, pungent taste. Both substances are found in horseradish, wasabi, and garlic, too.
Sulforaphane, phenethyl isothiocyanate, and benzyl isothiocyanate are responsible for milder and less pungent taste sensation and flavors and besides in mustard, they are also present in broccoli, brussels sprouts, watercress, and cabbages. The sulfoxide unit in sulforaphane has a similar chemical structure to a thiol, which creates onion- or garlic-like odors.
Glucosinolates and isothiocyanates are two further compounds, which contribute to mustard’s properties. Glucosinolates are a type of compound, which is broken down by the enzyme myrosinase in order to produce isothiocyanates. Isothiocyanates may help to reduce cancer risk by inhibiting cancer cell growth as well as the formation of cancer cells.
Sinigrin is a type of glucosinolate in mustard seeds, which possesses anti-cancer, antibacterial, antifungal, antioxidant, and anti-inflammatory properties. Researchers also found that sinigrin may support wound healing.

The edible mustard oil is mechanically pressed from mustard seeds. Mustard oil (edible oil) contains about 60% monounsaturated fatty acids (42% erucic acid and 12% oleic acid); it has about 21% polyunsaturated fats (6% the omega-3 alpha-linolenic acid and 15% the omega-6 linoleic acid), and it has about 12% saturated fats. With a smoking point of 254◦C (489◦F), it can be used for cooking, frying, deep frying, salad dressings and sauces. In comparison to edible vegetable oils such as soy and sunflower oil, mustard oil is the most stable due to its high smoke point.
Erucic acid is the major and characteristic component that can be found extensively in seed oils of the mustard family (Cruciferae) and Tropaeolaceae. Erucic acid, also known as cis–13-docosenoic acid, is an unbranched, monounsaturated fatty acid with a 22–carbon chain length and a single double bond in the omega-9 position.

When essential oil is extracted from mustard, ground mustard seeds are mixed with water, vinegar, or other liquid. By mixing the mustard seeds into liquid, the enzyme myrosinase is activated, which turns a glucosinolate known as sinigrin into allyl isothiocyanate. In a subsequent distillation step, a very sharp-tasting essential oil is separated. Essential mustard oil is also known as volatile oil of mustard and it contains more than 92% allyl isothiocyanate. Because of its high allyl isothiocyanate content, this type of mustard oil is toxic and irritates the skin and mucous membranes. In very small amounts, it is often used as flavouring additive in the food industry.