Electrolysis of water and aqueous solutions for the purpose of hydrogen generation is a promising process for the production of clean energy. The electrolysis of water is an electrochemical process where electricity is applied to split water into two gases, namely hydrogen (H2) and oxygen (O2). In order to cleave the H – O – H bonds by electrolysis, an electrical current is run through the water.
For the electrolytic reaction, a direct electric currency (DC) is applied to initiate an other-wise non-spontaneous reaction. Electrolysis can generate hydrogen of high purity in a simple, environmental-friendly, green process with a zero CO2 emission as O2 is the only by-product. 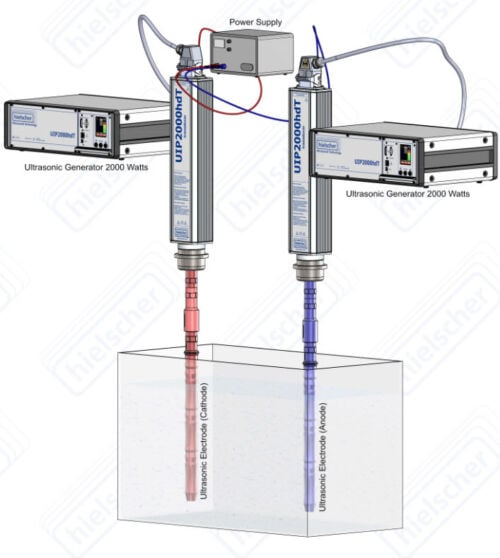 2x ultrasonic processors UIP2000hdT with probes, that act as electrodes, i.e. cathode and anode. The ultrasonic field intensifies the electrolytic synthesis of hydrogen from water or aqueous solutions.

Regarding the electrolysis of water, the splitting of water into oxygen and hydrogen is achieved by passing an electric current through the water.
In pure water at the negatively charged cathode, a reduction reaction takes place where electrons (e−) from the cathode are donated to hydrogen cations so that hydrogen gas forms. At the positively charged anode, an oxidation reaction takes place, which generates oxygen gas whilst giving electrons to the anode. This means, water reacts at the anode to form oxygen and positively charged hydrogen ions (protons). Thereby the following the equation of energy balance is completed:

Often, alkaline water is used for the electrolysis in order to produce hydrogen. Alkali salts are soluble hydroxides of alkali metals and alkaline earth metals, of which common examples are: Sodium hydroxide (NaOH, also known as “caustic soda”) and potassium hydroxide (KOH, also known as “caustic potash”). For eletcrolysis, mainly concentrations of 20% to 40% caustic solution are used. 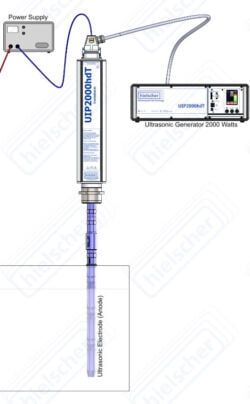 Ultrasonic probe of the UIP2000hdT functions as anode. The applied ultrasonic waves intensify the electrolytic synthesis of hydrogen.

When hydrogen gas is produced in an electrolytic reaction, the hydrogen is synthesized right at the decomposition potential. The surface of electrodes is the area, where hydrogen formation occurs on molecular stage during the electrochemical reaction. The hydrogen molecules nucleate at electrode surface, so that subsequently hydrogen gas bubbles are present around the cathode. Using ultrasonic electrodes improves activity impedances and concentration impedance and accelerates the rising of hydrogen bubbles during water electrolysis. Several studies demonstrated that ultrasonic hydrogen production increases hydrogen yields efficiently.

Benefits of Ultrasonics on Hydrogen Electrolysis

as ultrasound results in:

Ultrasonically excited electrolysis is also known as sono-electrolysis. Various ultrasonic factors of sonomechanical and sonochemical nature influence and promote electrochemical reactions. These electrolysis-influencing factors are results of ultrasound-induced cavitation and vibration and include acoustic streaming, micro-turbulences, microjets, shock waves as well as sonochemical effects. Ultrasonic / acoustic cavitation occurs, when high-intensity ultrasound waves are coupled into liquid. The phenomenon of cavitation is characterized by the growth and collapse of so-called cavitation bubbles. The bubble implosion is marked by super-intense, locally occuring forces. These forces include intense local heating of up to 5000K, high pressures of up to 1000 atm, and enormous heating and cooling rates (>100k/sec) and they provoke a unique interaction between matter and energy. For instance, those cavitational forces eimpact hydrogen bondings in water and facilitate splitting of water clusters which subsequently results in a reduced energy consumption for the electrolysis.

Ultrasonic Impact on the Electrodes

Cleaning and activation of surfaces

Mass transfer is one of the crucial factors influencing reaction rate, speed, and yield. During electrolytic reactions, the reaction product, e.g. precipitates, accumulate around as well as directly on the electrode surfaces and decelerate the electrolytic conversion of fresh solution to the electrode. Ultrasonically promoted electrolytic processes show an increased mass transfer in the bulk solution and near the surfaces. Ultrasonic vibration and cavitation removes passivation layers from the electrode surfaces and keep them thereby permanently fully efficient. Furthermore, sonification is known to enhance reaction pathways by sonochemical effects.

For water electrolysis, ultrasonic energy input, electrode gap, and electrolyte concentration are key factors that impact the water electrolysis and its efficiency.
For an alkaline electrolysis, an electrolysis cell with an aqueous caustic solution of usually 20%–40% KOH or NaOH is used. Electric energy is applied to two electrodes.
Electrode catalysts can be used to accelerate the reaction speed. For instance, Pt electrodes are favourable as reaction occurs more easily.
Scientific research articles report 10%-25% energy saving using the ultrasonically-promoted electrolysis of water.

Ultrasonic Electrolyzers for Hydrogen Production at Pilot and Industrial Scale

Hielscher Ultrasonics’ industrial ultrasonic processors are built for the 24/7/365 operation under full load and in heavy duty processes.
By supplying robust ultrasonic systems, special designed sonotrodes (probes), which function as electrode and ultrasound wave transmitter at the same time, and electrolysis reactors, Hielscher Ultrasonics caters the specific requirements for electrolytic hydrogen production. All digital industrial ultrasonicators of the UIP series (UIP500hdT (500 watts), UIP1000hdT (1kW), UIP1500hdT (1.5kW), UIP2000hdT (2kW), and UIP4000hdT (4kW)) are high-performance ultrasonic units for electrolysis applications.
The table below gives you an indication of the approximate processing capacity of our ultrasonicators:

Hydrogen is the chemical element with the symbol H and atomic number 1. With a standard atomic weight of 1.008, hydrogen is the lightest element in the periodic table. Hydrogen is the most abundant chemical substance in the universe, constituting roughly 75% of all baryonic mass. H2 is a gas which forms when two hydrogen atoms bond together and become a hydrogen molecule. H2 is also called molecular hydrogen and is a diatomic, homonuclear molecule. It consists of two protons and two electrons. Having a neutral charge, molecular hydrogen is stable and thereby the most common form of hydrogen.

When hydrogen is produced on industrial scale, steam reforming natural gas is the most widely used production form. An alternative method is the electrolysis of water. Most hydrogen is produce near the site of its latter use, e.g., near fossil fuel processing facilities (e.g., hydrocracking) and ammonia-based fertilizer producers.