Weathered, dried, aged and cracked asphalt has lost its original tar oils and is damaged by oxidation, so that cracks, potholes and rutting in the wheel path occur on the surface. In regards to the huge amount of asphalt used in construction, the rehabilitation and rejuvenation of pavements and other asphalt structures is an important sector, which helps to save resources and expenditures.
Existing asphalt structures, damaged by weather, age and traffic load, can be rehabilitated and rejuvenated by the application of fog seals, slurry seals, chip seals, scrub seals, cape seals and other asphalt rejuvenators. Those seal formulations consist in a mixture of water, asphalt emulsion, aggregate (small gravel, also called chips), polymers, and nano-additives
Modified asphalt pavements that contain certain reinforcing nanoparticles exhibit desirable thermal, electrical and mechanical properties and have thereby improved functionalities. In order to reduce cost of asphalt binder and road maintenance and to increase their environmental-friendliness, alternative technologies such as ultrasonically blended and functionalized additives and new asphalt composite formulations, which have the capability of self-repair, are essential to preserve and renew existing pavements in the future.

An asphalt emulsion consists of three main components: asphalt, water and an emulsifying surfactant. Being a stable dispersion of asphalt cement droplets in water, an asphalt emulsion can be pumped, stored and mixed with aggregates. An emulsion should “break” quickly upon contact with aggregate when mixed or after being sprayed. Breaking is the separation of the water from the asphalt. When the water has evaporated, the emulsion is “set”. After breaking, curing and setting, the asphalt residue has the adhesion, durability and water-resistance properties of the original base asphalt.
Ultrasonic emulsification allows to formulate high-quality asphalt emulsions
The ultrasonic emulsifying technique is compatible with multiple emulsifier and surfactant formulations. The choice of emulsifier impacts the setting characteristics of asphalt emulsions, making them slow setting, medium setting and quick setting. Additives, modifiers, fillers, fibers, rubbers and other formulation ingredients can be added during various stages of the sonication process – depending on the formulation and the mixing requirements of the specific compounds. 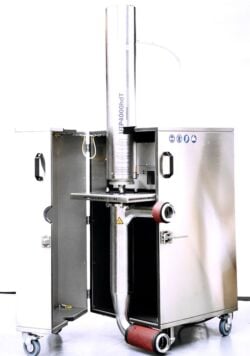 The emulsion grade of an asphalt emulsion and asphalt rejuvenator is an important factor, that determines the breakup velocity (fast, medium or slow setting). The type (ionic / non-ionic) and concentration of the emulsifying agents as well as the formulation specifics such as emulsions/solids ratio, porosity, particles size and gradation influence the setting behaviour. Since ultrasonic emulsification parameters can be precisely controlled, the sonication impact on the emulsion can be adjusted to the targeted asphalt quality. Weather micron-, submicron or nano-emulsions are targeted, ultrasonic processing gives you the full control over the process parameters.

The penetrating capabilities of asphalt rejuvenators are crucial, since a high-performance rejuvenating agent penetrates the pavement structure and seals the surface. A high-performance asphalt rejuvenator, which is able to penetrate deep into the asphalt binder (bitumen), increases the flexibility and restores from the inside so that a self-healing of the pavement achieved. Prepare highly functionalized asphalt emulsions formulating submicron- and nano-sized droplets with power-ultrasound!

Ultrasonic emulsification and dispersion is ideal to prepare master batches of highly concentrated asphalt emulsions. Ultrasonically prepared emulsions with high asphalt content (up to 90%) are diluted later to reach 70% or 60% concentration in order to reach the desired water/oil phase ration according for the final application. 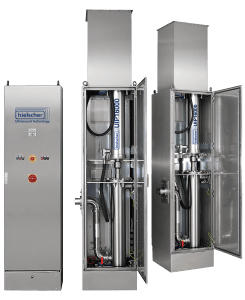 The ultrasonic mixing technology allows to develop and produce asphalt rejuvenating formulations which are easy to handle, cost-effective and environmental-friendly. Powerful ultrasonic cavitation creates sub-micron and nano dispersions and emulsions, which exhibit excellent penetrability, high-performance, and long-term endurance.
Mix your paving emulsions and dispersions for asphalt mixtures by high-power ultrasonication!

Hielscher Ultrasonics manufactures and supplies high-power ultrasonic mixers for asphalt and bitumen emulsions. Industrial ultrasonic dispersers for inline emulsification offer opens the possibility to process a wide range of asphalt and bitumen emulsions. Sonication allows for the facile testing of new formulations, which are uniformly emulsified for excellent emulsion stability and performance. Various ultrasonic reactor geometries and inserts such as the MultiPhaseCavitator allow for the easy adaption of the ultrasonic processor to your specific asphalt or bitumen formulation.
A coarse premix of liquid and solids is fed into the ultrasonic disperser, where the both phases (water + asphalt or bitumen + optional additives) are wet-milled and grinded uniformly into a highly stable colloidal suspension. Ultrasonic milling and dispersing is capable to process high volumes in a rapid process.

What is an Asphalt Emulsion?

An asphalt emulsion is a mixture of water and asphalt. Since asphalt is an oily, hydrophobic compound, it cannot be mixed with water. By adding a surface active agent also known as emulsifier, surfactant, emulsifying agent, stabilizer) to the water before or during adding the asphalt, the asphalt and water become mixable. The addition of surfactant facilitates the dispersion of asphalt particles in the aqueous phase (water) and keeps it dispersed in suspension. To mix the asphalt as small particles into the suspension, mechanical shear mixing equipment (e.g ultrasonicatior, high-shear mixer, colloidal mill etc.) are used. A high-quality asphalt emulsion gives the pavement rutting resistance, moisture susceptibility, cracking resistance and fatigue performance.
Definition of Emulsion
“An emulsion is a heterogeneous system thermodynamically unstable formed by at least two immiscible liquid phases, where one is dispersed in the other in form of little droplets (beads) whose diameter is generally higher than 0.1µm. Such a system has a minimum stability which could be improved by addition of appropriate agents, such us surfactants, or finely solid divided”. (Becher, P. Emulsion. Theory and Practice. 1961.)

What are Slurry Seals?

Slurry seals are a formulation of water, asphalt emulsion, aggregate, and additives to an existing asphalt pavement surface. A slurry seal is similar to a fog seal except the slurry seal has aggregates as part of the mixture. Polymer is common additive that improves the asphalt emulsion’s properties. This combined mixture of the emulsion and aggregates is the so-called slurry in order to protect the underlying pavement structure and to provide a new roadway surface.

What are Fog Seals?

Fog sealing refers to the application of a special formulated asphalt emulsion to an existing asphalt pavement surface. A fog seal emulsion consists in a water-oil mixture, which can be easily sprayed onto an existing pavement, also known as “fogging.”

What are Chip Seals?

The application of a chip seal involves an asphalt emulsion that contains globules of paving asphalt, water, an emulsifying agent or surfactant, polymer, and often a rejuvenator additive. CHip seals are applied in a two-step process which includes first the distribution of the asphalt emulsion and subsequently a layer of small crushed rock to an existing asphalt pavement surface. The small crushed rock is also called “chips”, which gives the chip sealing method its name.

What are Scrub Seals?

What are Cape Seals?

Cape sealing refers to the application of a chip or scrub seal with a subsequent application of slurry seal or microsurfacing at a later date. Whilst chip or scrub seals seal and bond the cracks in the existing pavement, the subsequent slurry seal or microsurfacing improves the chip retention and smoothness of the roadway surface. Cape seals a re mostly used as an intermittent workaround, used for asphalt structures which exhibit only moderate distress, slight or no ruts, moderate crack widths. Cape sealing is mostly used as remedy to extend the pavement life until rehabilitation or reconstruction is performed.

What is Causing Pavement Deterioration?

As pavement ages it starts to deteriorate. How quickly it breaks down is influenced by many factors. The primary factors are the environment and traffic loadings. Sunlight over time oxidizes the surface layer and causes it to become brittle. If the pavement is too brittle cracks start to form as a result from high repetitions of traffic loading on the pavement. If the pavement is not sealed properly, rainwater or irrigation water can infiltrate the cracks into the base layer and damage the structural integrity of the pavement. Water can erode or wash away the underlying base layers and cause the pavement to fail from lack of support.