Ultrasonic Extraction of Astaxanthin from Microalgae

Astaxanthin for dietary supplements, which are consumed by humans and animals for their health benefits, astaxanthin is obtained from seafood or extracted from the algae H. pluvialis. Haematococcus pluvialis is a green microalga, which produces high astaxanthin contents when stress conditions are applied, e.g. high salinity, nitrogen deficiency, high temperature and light. With up to 9.2mg/g astaxanthin per algae cell (= up to 3.8% on the dry weight of H. pluvialis), the Haematococcus pluvialis accumulates a very high content of natural astaxanthin and is therefore the preferred organism for the production of astaxanthin.
To release astaxanthin from green microalgae, the algae cells must be disrupted. Ultrasonication is well established for the purpose of cell disruption, lysis and isolation of bioactive compounds auch as lipids, antioxidants, polyphenols and natural pigments. High-performance ultrasonics creates purely mechanical forces which disrupt cell walls by shear forces and cause the release of bioactive substances such as astaxanthin.

Ultrasonic Extraction of Astaxanthin from Yeast 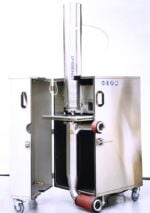 Phaffia rhodozyma is a yeast rich in astaxanthin. However, the thick cell wall of P. rhodozyma, which is mainly composed of glucan and responsible for the cell rigidity, makes cell disruption and astaxanthin isolation a demanding task. Researchers (Gogate et al. 2015) found that ultrasonic extraction in combination with lactic acid intensifies the cell disruption and makes the extraction of astaxanthin from P. rhodozyma a greener, environmetal-friendlier process. They used lactic acid as the medium for disruption and ethanol as solvent for extraction. The maximum yield of astaxanthin (90%) was obtained for the ultrasound-assisted extraction approach based on the use of 3 M lactic acid, disruption time of 15 min. Powerful ultrasonic processors such the UIP4000hdT (4kW, see pic. left) in combination with a pressurizable flow-through reactor enable for the generation of very intense cavitation. Cavitational shear forces disrupt the yeast cell walls and promote the mass transfer between the cell interior and the solvent. 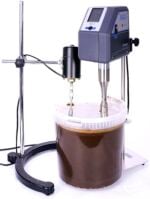 Astaxanthin is a lipophilic compound and can be dissolved in solvents (e.g. 48.0% ethanol in ethyl acetate) and oils (e.g. soy bean oil).
Batch: Ultrasonic extraction processes can be operated as simple batch processes or as inline treatment, where the medium is continuously fed through an ultrasonic flow-through reactor.
Batch processing is an easy procedure, where the extraction is performed lot by lot. Hielscher Ultrasonics offers ultrasonic processors for small to large batches, i.e. 1L to 120L.
For processing batches of 5 to 10L, we recommend the UP400ST with sonotrode S24d22L2D (see pic. left).
For processing batches of approx. 120L, we recommend the UIP2000hdT with sonotrode RS4d40L4(see pic. at top right).

Flow-through: For larger volumes and full-scale commercial extraction, a continuous liquid stream is fed through an ultrasonic reactor, where the solvent/botanical slurry is intensely sonicated.
For a volume of approx. 8L/min., we recommend the UIP4000hdT with sonotrode RS4d40L3 and pressurizable flow-cell FC130L4-3G0

Hielscher Ultrasonics is specialized in manufacturing high-performance ultrasonic processors for the production of high-quality extracts from botanicals.
Hielscher’s broad product portfolio ranges from small, powerful lab ultrasonicators to robust bench-top and fully industrial systems, which deliver high intensity ultrasound for the efficient extraction and isolation of bioactive components (e.g. quercetin, caffeine, curcumin, terpenes etc.). All ultrasonic devices from 200W to 16,000W feature a coloured display for digital control, an integrated SD card for automatic data recording, browser remote control and many more user-friendly features. The sonotrodes and flow cells (the parts, which are in contact with the medium) can be autoclaved and are easy to clean. All our ultrasonicators are built for 24/7 operation, require low maintenance and are easy and safe to operate.

A digital colour display allows for a user-friendly control of the ultrasonic equipment. Our systems are capable to deliver from low up to very high amplitudes. For the extraction of chemical compounds such as astaxanthin, we offer special ultrasonic sonotrodes (also known as ultrasonic probes or horns) that are optimized for the sensitive isolation of high-quality active substances. Hielscher’s special sonotrodes for high amplitudes in combination with pressurizable flow cells generate extreme cavitational shear forces, which disrupt even very sturdy yeast cells. The robustness of Hielscher’s ultrasonic equipment allows for 24/7 operation at heavy duty and in demanding environments.
The precise control of the ultrasonic process parameters ensures reproducibility and process standardization. Hielscher’s industrial-scale automated ultrasonic extraction systems are designed for high production capacities of superior quality extracts, whilst at the same time reducing labor, cost, and energy.

Ultrasonic extraction or sono-extraction is based on the principle of acoustic cavitation.
When intense ultrasound waves are applied to liquid systems, acoustic cavitation occurs, which is the phenomenon of the generation, growth and eventual collapse of vacuum bubbles (see pic. below). During the propagation of the ultrasound waves, the vacuum bubbles oscillate and grow until they reach a point when they cannot absorb more energy. At the peak of bubble growth they collapse violently, which causes locally thermal, mechanical, and chemical effects. The mechanical effects include high pressures of up to 1000atm, turbulences, and intense shear forces. Those forces disrupt cell walls and promote mass transfer between the cell interior and the solvent releasing bioactive compounds into the surrounding liquid (i.e. solvent).

Ultrasonic extraction of compounds from botanicals and cell tissue has been well researched. The application of highly intense ultrasonic waves promotes extraction processes significantly. Besides process intensification – which results in higher yields and shorter extraction time – thermal degradation and loss of temperature-sensitive constituents is prevented since sonication is non-thermal treatment. Furthermore, ultrasonic extraction has low investment and operational costs, reduces the use of solvents and/or allows for the use of greener solvents, which makes it an economical and environmental-friendly extraction technique. Outperforming conventional extraction methods, ultrasonically-assisted extraction (UAE) has been adopted from the food industry to produce bioactive compounds with economical gains.

Astaxanthin is distinguished by a deep red colour. It is a fat-soluble pigment that is found in algae (e.g. Haematococcus pluvialis, Chlorella zofingiensis, Chlorococcum), yeast (e.g. Phaffia rhodozyma), salmon, trout, krill, shrimp and crayfish. Astaxanthin is considered a super-antioxidant since its antioxidative potency is ten to twenty times more powerful than of many other carotenoids, such as beta-carotene, lutein, and zeaxanthin, and a hundred-times more powerful than alpha-tocopherol (vitamin E).
Astaxanthin (3,3′-dihydroxy-β, β′-carotene-4,4′-dione) is a keto-carotenoid and belongs to a larger class of chemical compounds known as terpenes (as a tetraterpenoid), which are composed of five carbon precursors, isopentenyl diphosphate, and dimethylallyl diphosphate. Astaxanthin is classified as a type of carotenoid compounds with oxygen-containing components, namely hydroxyl (-OH) or ketone (C=O), such as zeaxanthin and canthaxanthin. Astaxanthin is a metabolite of zeaxanthin and/or canthaxanthin, containing both hydroxyl and ketone functional groups. Like many carotenoids, astaxanthin is a lipid-soluble pigment and is distinguished by its red colour. Carotenoids including astaxanthin are well known for their antioxidative capacity.
Astaxanthin is a red pigment and naturally originates in the rainwater microalgae (Haematococcus pluvialis) and the yeast called Xanthophyllomyces dendrorhous (also known as Phaffia rhodozyma). The algae undergoes a stressing via one or a combination of conditions ranging from the lack of nutrients, increased salinity, and excessive sunshine to create Astaxanthin. The species that consume those stressed freshwater microalgae, such as salmon, red trout, red sea bream, flamingo, crustaceans (e.g. shrimp, krill, crab, lobster, crayfish), reflect the pigmentation of the red-orange hues in their appearance.
As a supplement, astaxanthin is administered for its health-promoting and illness-treating effects. Astaxanthin is a well-established nutraceutical administered to improve skin heath (e.g. reduce wrinkles, damages by sun burn etc.).
Furthermore, astaxanthin gets increasing attention for its use to treat Alzheimer’s disease, Parkinson’s disease, cardio-vascular deaseses, high cholesterol, liver diseases, age-related macular degeneration, and preventing cancer.