The use of water-in-fuel emulsions is a rapidly expanding due to tightened environmental regulations and the tougher competition in the transportation market. The ultrasonic emulsification technology enables for a more efficient use of fuels, such as heavy fuels or diesel, by mixing water into the base fuel. Ultrasonically emulsified water-fuels provide a more complete combustion and a more economic fuel consumption, whilst burning the fuels with fewer emissions!

The combustion of fuels generates hazardous gasses, such as nitrous oxides (NOx), hydrocarbons (HC), carbon monoxide (CO), carbon dioxide (CO2) as well as particulate matter (PM), soot and smoke, which are harmful to human health and environment. The emission of those pollutants can be significantly reduced by adding water to the fuel.
The addition of 5 – 25% water to the fuel, such as heavy fuel oil or diesel, can reduce the emisson of hazardous pollutants drastically. The injected water reduces the local adiabatic combustion temperature. Studies have proven that thereby the emission of NOx can be lowered by up to 40%, CO2 by 5% – 15% and PM by up to 90%. Black smoke from diesel combustion can be completely eliminated as the fuel is burned completely.
At the same time, the fuel consumption can be reduced by approx. 5%. Save the environment and save fuel!
Emulsifiable fuels include liquid hydrocarbons, crude, heavy fuels (HFO), naphtha, kerosene, diesel, heating oils, biodiesel and vegetable oils. 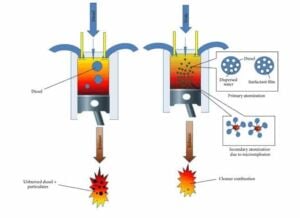 Primary and secondary atomization in spray flame of emulsified fuel.

The grafic above compares the combustion of straight diesel and a water-in-diesel emulsion (WiDe). The water-in-diesel fuel burns significantly cleaner. (Click on the image above to enlarge!)

Power ultrasound is a well known and proven technology to create fine-size emulsions with droplets in the micron and nano range. The ultrasonic emulsification technology is based on cavitational shear forces. By ultrasonic cavitation, the water and fuel droplets are minimized to nano size and are blended together so that a fine-size (nano-/ mini-)emulsion is produced. For the ultrasonic inline emulsification, the separate fuel and water streams can be precisely adjusted so that a constant ratio of water and fuel is ensured.
The ultrasonic homogenizers can be installed directly before the injection pump so that the homogeneous water-fuel emulsion can be injected immediately into the engine and the storage of the fuel emulsion is avoided. When the water-fuel emulsion is injected into the combustion chamber, the water droplets evaporate due to the high temperatures rapidly as the boiling point of water is much lower as of the fuel. During the vaporization process, the water droplets burst in a micro-explosive way and disrupt the fuel into smaller droplets. Thereby, the water-fuel is atomized in the combustion chamber so that fuel and air in the combustion chamber are better mixed and the fuel can be burned completely. The very small droplets offer a very high particle surface resulting in a large low-tension water-oil interface, which improves the atomization further. This increases the combustion efficiency, finally resulting in a significant fuel cost reduction, which exceeds the costs for the emulsification.
The ultrasonic blending technology is an inline process, which can be easily retrofitted at existing engines. The engine itself requires no modifications. 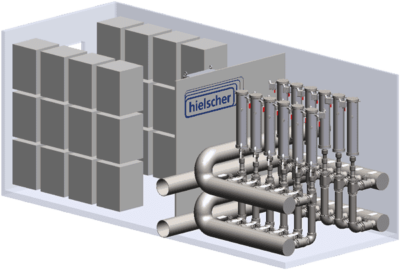 The ultrasonic emulsification technology is based on cavitation and high shear mixing. High intense ultrasound waves are coupled into the liquid medium (fuel-water mixture) and create droplet sizes in the nano range and allow to produce two-phase water-in-oil emulsions and three-phase oil-in-water-in-oil emulsions.

Hielscher supplies heavy duty industrial ultrasonic equipment which can handle high fuel streams – even at high viscosities. Hielscher’s ultrasonic homogenizers are built for 24/7 operation under rough conditions. Our systems are operator-friendly and compact, do not have any moving parts, are easy to install and operate and barely require maintenance.
The ultrasonic emulsion fuel production can be securely controlled via PC or browser control, whilst the two separate feeding streams of water and fuel allow for an accurate dosage of the water-fuel ratio and the regulation/ adaption of the fuel mixture during operation in accordance to the current engine load/ speed. 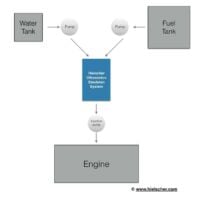 Aqua-fuels is a term that is alternatively used for emulsified fuels (so-called emulsion-fuels). Those type of fuels are emulsions composed of water and a liquid combustible, such as oil, fuel, gas or diesel. Emulsions are a particular mixture of two or more immiscible liquids comprising a continuous and a dispersed phase. Ultrasonic emulsification is a powerful and reliable technique to emulsify water and oil (fuel, crude, diesel etc.) by creating nano-sized droplets. Sonication is thereby an innovative technology for cleaner and more effective combustion of fuels.