THC, or tetrahydrocannabinol (delta-9-tetrahydrocannabinol), is the chemical that causes most of marijuana’s psychological effects. For the cannabis species, can be more than 400 different strains are known. Depending on the specific cannabis strain, cannabis can have as little as 0.3 wt% THC. In other strains, the THC content can reach up to 20 wt%.
Also the different cannabis products vary significantly: So ranges the average THC concentration in marijuana between 1 to 5%; in hashish, the THC content is between 5 to 15%, and in hashish oil, it averages 20%. THC in recreational doses of marijuana is highly variable and the lower the THC content in the marijuana, the more the user must consume to experience the desired effects.
The application of power ultrasound (also known as sonification) is a proven tool for extraction of active ingredients from plant material. THC as well as other active components such as cannabinoids and terpenes can be extracted successfully by sonication. Click here to read more about ultrasonic cannabis extraction!

Ultrasonic sample preparation is used to analyse the THC content

Sample preparation: For the preparation of the samples, the dried plant material must be macerated and grinded to a homogeneous powder. For the ultrasonic extraction, 500mg of the cannabis plant powder and 5mL methanol-chloroform mixture (ratio of 9 : 1) are mixed in a vial. Sonication can be applied using an ultrasonicator with micro tip, the VialTweeter or the ultrasonic CupHorn. The sonication time takes approx. 5 min. Afterwards, let the sample rest for at least 5 min. Dilute the clear supernatant with the extraction mixture (v/v: 1 : 10). Free THC: 1μL on the TLC-plate
Decarboxylation: 100μL of the extract is evaporated to dryness. The residue is heated at 180℃ for 4 min. Add 500μL of methanol-chloroform (v/v 9 : 1). Sonicate for 5 min. Dilute the clear supernatant with the extraction mixture (v/v: 1 : 10).
Calibration: 20ng, 60ng, 100ng, 140ng
HPTLC:
TLC silica gel F-254, Merck 5729
TLC scanner II, software CATS3, Camag Muttenz Eluens:
Ethylacetat : Toluol : Chloroform = 3 : 17 : 0,25 (v/v/v)
Postchromatographic derivatisation: Fast Blue Salt 0,1% in 0,1 M NaOH
Densitometry at 550 nm

Tetrahydrocannabinol (Δ9-THC) for analysis and extraction 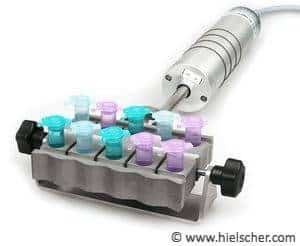 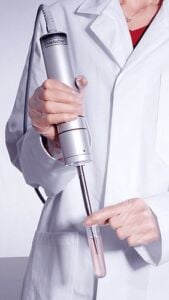 UP200St with micro-tip for sample sonication

Sample preparation (analogue to GC prep): The dried plant material is macerated and grinded to a homogeneous powder. For the extraction, 500mg of the cannabis plant powder and 10mL methanol-hexan mixture (ratio of 9 : 1) are mixed in a vial. Sonication can be applied using a probe-type ultrasonicator with micro tip, the VialTweeter or the ultrasonic CupHorn. Sonicate the sample for 15-20 min. Shake the sample and let it rest for at least 5 min. Dilute the clear supernatant with the extraction mixture (v/v 1: 20). 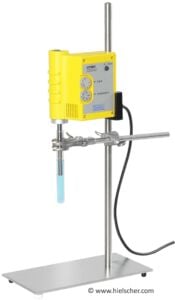 Marijuana consists of the dried flowers and subtending leaves and stems of the female Cannabis plant. This is the most widely consumed form and it contains approx. 3% to 20% THC. Specific, highly bred forms of marijuana reach a THC content of more than 30%. Marijuana is the source material all other varieties of THC-containing cannabis product. To convert the most abundant cannabinoid, tetrahydrocannabinolic acid (THCA), into the psychoactive THC, a decarboylation process must be initiated. Therefore, the cannabis and its extracts must be heated or dehydrated to cause decarboxylation.

Kief refers to a powder, rich in trichomes, which is sifted from the cannabis leaves and flowers. It is consumed either in powder form or compressed and used in hashish cakes.

Hashish or hash is a concentrated resin cake or ball that is either produced from pressed kief or from the resin that is scraped from the surface of the plant and rolled into balls. It occurs in various colors from black to golden brown depending upon purity and source. It can be consumed orally or smoked, e.g in a pipe, hookah, bong, bubbler, vaporizer, using a hot knife, smoked in joints, mixed with cannabis buds or tobacco, smoked as bottle tokes or used as ingredient in food.

Cannabis Tincture refers to the extract of cannabinoids in alcohol. The cannabinoids are extracted from the cannabis plant using high-proof spirits (mostly grain alcohol) to create the tincture.

Hash oil is a resinous matrix of cannabinoids produced by solvent extraction, formed into a hardened or viscous mass. Hash oil is one of the most potent cannabis products because of its high level of psychoactive compound. The use of hash oil extracted in butane and supercritical carbon dioxide has recently gained an increasing popularity.

Infusions refer to different kinds of cannabis infusions which differ from each other by the broad variety of non-volatile solvents that can be used to produce a cannabis infusion. To prepare such infusion, cannabis plant matter is mixed with a solvent and then pressed and filtered to transfer the oils from the plant into the solvent. Cocoa butter, dairy butter, cooking oil, glycerine, and skin moisturizers are commonly used solvents.

Medical marijuana refers to the use of the Cannabis plant as a physician-recommended herbal therapy as well as synthetic THC and cannabinoids. This usage generally requires a prescription, and distribution is usually done within a framework defined by local laws. Several research studies have shown that the use of cannabis or its derivatives acts against e.g. chemotherapy-induced nausea and vomiting, neuropathic pain, and multiple sclerosis.