Ultrasonic Levitation and its Industrial Applications

Ultrasonic / acoustic levitation is an industrially-proven option for non-contact bearing of light-weight sensitive materials as well as for contact-free sample handling. Learn more about ultrasonic levitation and its applications in industry and science!

Acoustic levitation is a scientifically proven and industrially adopted method for contact-free material handling and sample positioning. Ultrasonic levitation as non-contact handling method is used to manipulate surface sensitive and fragile workpieces, e.g. wafers, microchips or thin glass plates, without mechanical impact. Due to the contact-free handling of materials and samples, ultrasonic levitation has been implemented in industrial, scientific and analytical applications.
In industry, ultrasonic levitation is used as reliable method for contact-free, container-less processing of microchips and other small, delicate objects, which are prone to damage by even light physical contact. Another field of application is the handling of very-high-purity materials or chemical reactants, which would be influenced by a container. 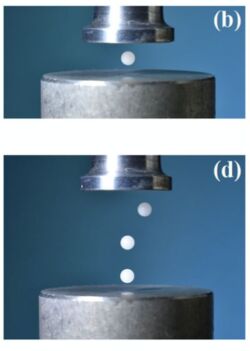 Acoustic levitation describes the application of ultrasound waves to a fluid, usually gas (e.g. air). When the ultrasound wave travels through the gas, the sound wave counter-balances the force of gravity – with the result that objects can hover unsupported in the air. This effect of a free-floating object in a sound wave requires the phenomenon of a standing wave. A standing wave is formed when two identical waves coming from the opposite directions superpose with each other. Therefore, in an acoustic levitation setup an ultrasonic transducer is used to create longitudinal pressure waves and a reflector on the other side reflects the waves, so that the identical wave coming from both side can overlay and form a standing waves. 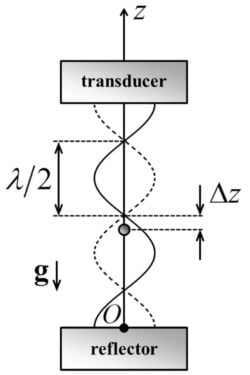 Acoustic levitation of a small rigid sphere at the pressure node of a plane standing wave established between a transducer/levitator and a reflector.
(study and pictures: © Andrade et al. 2018)

Nodes and Antinodes: The longitudinal pressure wave of intense ultrasound allows to hover contact-less in the air. Such standing ultrasound waves have defined nodes. A node is the area of minimum pressure, whilst an antinode is defined as the area of maximum pressure. The nodes of a standing wave are at the center of acoustic levitation.
Ultrasonic levitators work by positioning the standing wave field over an ultrasonic probe (i.e. sonotrode) and the use of a reflector. 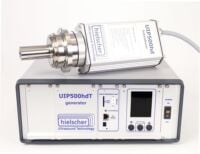 The ultrasonic processor UP400St is a compact system, where transducer and generator are combined in a robust housing. The 500 watts powerful levitator UIP500hdT features separate transducer and generator. With its IP64 grade transducer, the UIP500hdT is ideal for the installation in demanding environments.
Ultrasonic levitators can be installed as single unit or in parallel and are capable to operate in high-speed, high-throughput processing lines.
For specific requirements, Hielscher Ultrasonics designs and manufactures customized and proprietary levitators, too.