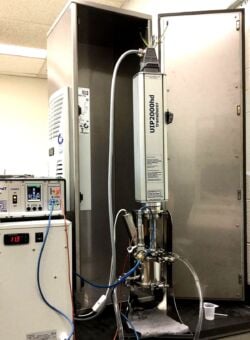 The ultrasonicator UIP2000hdT was successfully used to reduce the molecular weight of schizophyllan, a fungal β-glucan

Protocol for the Production of Low Molecular Weight Schizophyllan

β-1.3(1.6)-Glucan schizophyllan (SPG) was produced by submerged cultivation of S. commune fungus in bioreactor using sucrose as substrate.
After the end of cultivation, culture broth was diluted with demineralized water to schizophyllan concentration 2 g/L and ultrasonicated with the Ultrasonic Processor UIP2000hdT (Hielscher Ultrasonics GmbH, Germany) in recycle mode at the following parameters and conditions: medium flow 50 mL/s, frequency 20 kHz, output 2000 W, sonotrode type BS2d22, booster type B2-1.4 and amplitude 100%. Culture broth temperature at the beginning of sonication was 25°C. The ultrasonicated culture broth (specific energy input 100 Ws/mL) was filtered through Seitz HS800 depth filter under 1.5 bar pressure at 40°C. The ultrasonicated schizophyllan (uSPG) for chemical characterization was precipitated from the filtrate with triple amount of isopropyl alcohol at laboratory temperature, and dried at 60°C for 12h uSPG solutions for immunological studies were prepared as follows: (1) the ultrasonicated culture broth filtrate was diafiltrated through 0.1m2 Pall Centramate T-series PES cassette (100 kDa cut-off) at 0.8 bar and diafiltration continued until retentate conductivity was 20 μS/cm; (2) the solution was concentrated by diafiltration to uSPG concentration 1 g/L and sterilized by autoclaving at 120°C/20 min. Denatured uSPG was prepared in a similar way, except that NaOH was added to the culture broth filtrate in concentration 0.2 M and the alkalized solution was incubated for 30 min at laboratory temperature prior to diafiltration.

Mycelium yield was estimated gravimetrically: culture broth was diluted with water 1:4, centrifuged 10000 × g at 25°C for 20 min, precipitate was washed with triple amount of water, dried at 60°C and weighted. Schizophyllan was precipitated from supernatant with triple amount of isopropyl alcohol, dried at 60°C for 24h and its yield was determined gravimetrically. pO2 in the culture broth was measured by optical probe Hamilton-Visiferm DO 120 (Hamilton, Switzerland).
Culture broth dynamic viscosity was measured on HAAKE Visco Tester 6L with spindles 1L and 2L at 4°C and rotation speed of 30 rpm. Filtration speed was calculated from the filtration time of 500 mL culture broth through 200 × 200 mm Seitz HS800 (Pall, USA) depth filter at 1.5 bar pressure and 40°C.
uSPG molecular weight was measured by SEC-MALLS on HPLC system Alliance (Waters) with series-connected PL aquagel OH60 and PL aquagel OH40 columns, and detector miniDAWN TREOS (Wyatt) was concentrated by diafiltration to uSPG concentration 1 g/L and sterilized by autoclaving at 120°C/20 min. Denatured uSPG was prepared in a similar way, except that NaOH was added to the culture broth filtrate in concentration 0.2 M and the alkalized solution was incubated for 30 min at laboratory temperature prior to diafiltration. 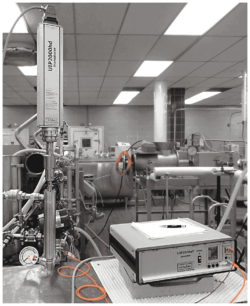 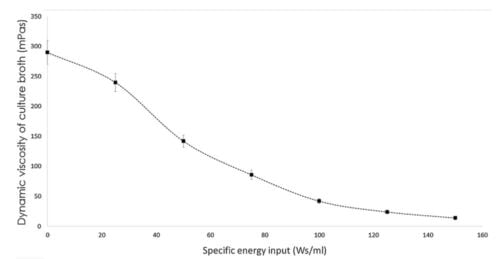 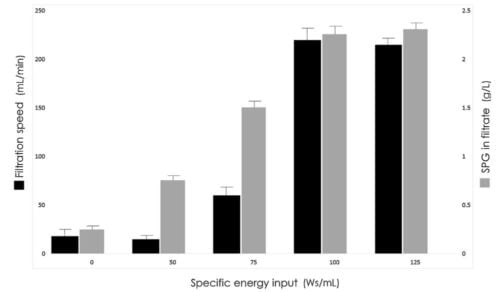 Conclusion: In their conclusion the research team resumes that ultrasonic processing is an effcient technology for manufacturing of low-molecular weight schizophyllan, which can then used in cosmetics and medicine. Ultrasonication, when applied on complete culture broth with mycelium, brings certain advantages to schizophyllan production. It reduces product losses during downstream processing and makes production of highly purified polysaccharide possible due to efficient usage of ultrafiltration.
Additionally, the researchers found that ultrasonic processing of schizophyllan is easily scalable. One unit of the pilot plant ultrasonic disintegrator UIP2000hdT processed 1 Liter of culture broth in 110 s in flow mode. Productivity of the system can be easily increased by sequential connection of additional ultrasound units. 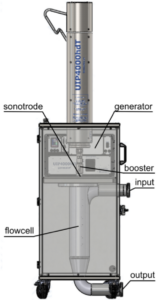 The fragmentation of polysaccharides such as glucans as well as other bioactive compounds such as chitin and chitosan can be reliably processes with Hielscher’s high-performance ultrasonic equipment. Our ultrasonicators can deliver high amplitudes, offers precise controllability over the process parameters and can be operated 24/7 under heavy load and in demanding environments. Hielscher Ultrasonics’ equipment range fulfils these requirements reliably. Besides outstanding ultrasound performance, Hielscher ultrasonicators boast high energy efficiencies, which is a significant economical advantage – especially when employed on commercial large-scale production.
Hielscher ultrasonicators are high-performance systems that can be equipped with accessories such as sonotrodes, boosters, reactors or flow cells in order to match your process needs in an optimal manner. With digital color display, the option to preset sonication runs, automatic data recording on an integrated SD card, remote browser control and many more features, highest process control and user-friendliness are ensured. Paired with robustness and heavy load-bearing capacity, Hielscher ultrasonic systems are your reliable work horse in production. The reduction of molecular weight of β-glucans such as schizophyllan requires powerful ultrasound to obtain the targeted cleavage and a final schizophyllan product of high-quality, which can be used for pharmaceutical applications.

Schizophyllan, also known as sizofiran, SPG, sonifilan, sizofilan, is a neutral extracellular polysaccharide produced by the fungus Schizophyllum commune Fries, a species of Basidiomycetes mushroom. Schizophyllan is a soluble beta-D-glucan, whose exact mechanism of action is not yet fully elucidated, but this specific β-glucan shows immunomodulating and antitumor effects. Although sizofiran’s exact mechanism of action has yet to be fully elucidated, this agent appears to stimulate the immune system by increasing cytokine production, activating macrophages and Langerhans cells and enhancing the activity of polymorphonuclear leukocytes (PML) and natural killer (NK) cells. Sizofiran was found rather ineffective against gastric cancer, but extended survival time in patients with head and neck cancer. In cervical cancer, Sizofiran prolonged survival and time to recurrence for stage II cases but not stage III, and showed added effectiveness when injected directly into the tumor mass. Sonifilan is used as a biological response modifier (BRM) with radiation therapy for cancer treatment in Japan. It was launched for cervical cancer in South Korea in 1998.